My long overdue novel with co-author Cal Orey about a boy and a set of carillon bells in France during the German occupation. 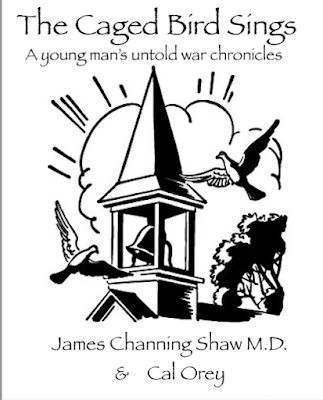 A novel inspired by true events

1940, in the Nazi-occupied city of Rouen, France: Despite Germany’s stranglehold on the French, Benjamin Cohen, an introverted but musically talented thirteen-year-old, defies his father to study the carillon in the Catholic cathedral, a huge instrument of fifty-five bells. Though impeded by the German threat and his perceived dismissal by family, his confidence grows with the help of his new “family” at the cathedral and his pet cockatiel, Frère Jacques. This coming-of-age tale tells of wartime dynamics between Catholic and Jewish, boy and girl, father and son, and two estranged brothers on their journeys through war, love, and tragedy. Can Benjamin’s mastery of the carillon and his love affair with troubled nun-in-training, Marie-Noelle, give him le courage he needs to perform the one act that can save his people from Nazi arrest and earn back his father’s respect? Or will it doom them all?

Posted by James Channing Shaw at 9:51 AM

James Channing Shaw
Dr. Shaw's books include THE CAGED BIRD SINGS: A Young Man's Untold War Chronicles (2021); CITY OF DESTINY: SHORT FICTION, MORE OR LESS(2020); a medical career memoir ROOM FOR EXAMINATION: More Than Skin Deep(2012; a cookbook HERE'S ALL YOU NEED(2018), and a literary collection THE QUOTABLE ROBERTSON DAVIES(2005), a compilation of quotations from one of Canada's most respected authors. He has published health columns in the LA Times and numerous scientific works. Dr. Shaw can be reached at jcshaw701@gmail.com